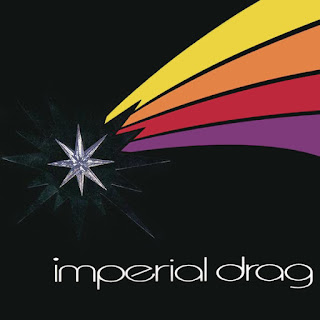 Interesting little mid-90s gem here. Imperial Drag were a short-lived band fronted by Roger Joseph Manning, Jr., after the break-up of edgy power pop alt.rock act Jellyfish and before he embarked on a series of wild and weird baroque pop solo albums. It's an interesting blend of skewed power pop and a harder-rocking, '70s glam-tinged sound, shades of T.Rex and Sweet and later post-Cheap Trick power-poppers like The Shazam.

Opener "Zodiac Sign" kicks it off with a frenzied riff, a pop hook buried under relentless energy; "Boy Or A Girl" is more mid-tempo glam rock, from the the sneaky Sweet-inspired groove to the lyrical theme; and, later on, "Spyder" conjures 70s hard rock like Bad Company with a dose of Bowie, while "Stare Into The Sun" is an almost proggy T. Rex vamp. Meanwhile, "Man In The Moon" turns it down a notch, a spacier Ziggy Stardust vibe modernized for 90s ears; and "'Breakfast' By Tiger" is as close as it gets to straight power pop.

I wouldn't call it a great lost classic (I'm more partial to Manning's less hard-rocking, more pop-oriented solo work), but it's a cool listen, an opportunity to crank up the speakers for something that breaks from more predictable 90s alt.rock fare.