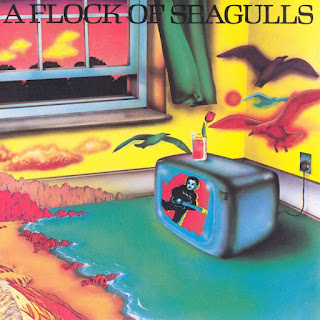 1982 was a pretty big year in my musical development. Mainly because I turned 16 and got my driver's license. Which meant on weekends I could borrow my mom's car and drive into Evanston, near Northwestern University, and hit all the used record stores that lined Dempster Street. With little cash on hand, most of my music exploration up 'til this point had been limited to the local public library's record collection; I could only afford occasional record purchases at the chain stores at the mall or the nearby shopping center (both within biking distance). And, of course, these stores' selection was generally limited to new releases and big sellers.

But the used record stores in Evanston, about a 20-minute drive from my house, had a much broader (if eclectic and random) selection, and for just a few bucks I could pick up a lightly-scuffed slab of vinyl that was good enough to feed my constant need to grow my collection.

At the time, I was still in classic rock (and prog) look-back mode, and a lot of my purchases were aimed at filling the gaps in my musical knowledge. Sure, I could pick up a cassette copy of ChangesOne at the mall, kicking off my eternal love of Bowie, but at the used record store I could find Aladdin Sane for $3.99. And while I paid full-price for a new copy of Discipline from the newly-reformed King Crimson at the mall, a few hours combing Dempster Street with a $20 bill allowed me to come home with used copies of Larks' Tongues in Aspic and Islands and Starless & Bible Black and Lizard and Red, writing off the occasional static and skip as a fair trade-off in quality for quantity.

But my journeys through the past didn't mean I wasn't also trying to keep current. I'd also be hunting for discounted copies of newer releases, the bands you'd see on MTV or hear on the radio or at high school parties and figure you needed to check out. So one day I picked up Flock of Seagulls' debut, which was already in the used bin not long after its release, presumably returned by someone who'd seen the "I Ran" video--played every 5 minutes on MTV that summer, those crazy haircuts capturing the imagination of dull American suburbia--and bought the record and realized that Flock of Seagulls wasn't exactly the sort of band they wanted to be listening to all that often.

Which was kinda my take. Yeah, "I Ran" was pretty essential at the time (and, let's face, still holds up), but most of the record was nothing special. It wasn't bad, mind you, but probably less exciting than other synth-dominated bands like, say, Orchestral Manoeuvres In The Dark.

The exception, of course, was "Space Age Love Song." I loved that one even more than "I Ran," and to this day it serves as one of the definitive songs of the era, that chiming, heavily-reverbed riff instantly transporting me back to my teen years. If space aliens landed in my backyard and asked me to explain "80s New Wave Music" to them, the songs I most closely associate with that particular moment in time, I'd start with "Space Age Love Song." (Plus probably throw in INXS's "Don't Change," Psychedelic Furs' "Love My Way," and Modern English's "I Melt With You.")

"I Ran":"Modern Love Is Automatic":