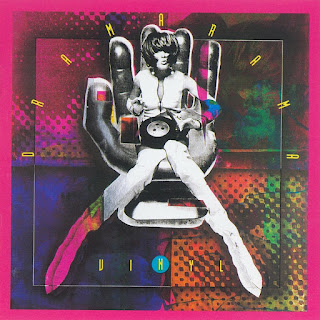 I'm posting this in response to a suggestion from a reader of the blog. I'll have to admit it's not an album I've heard in just about forever, but I'm glad I dusted it off.

I remember L.A.-by-way-of-New-Jersey band Dramarama mainly for their 1985 debut, Cinéma Vérité, which arrived while I was still at the college radio station and got a fair amount of airplay (most notably the break-out single "Anything, Anything"). It had that blend of jangle pop and harder-edged garage rock, with just a hint of glam (the debut helpfully included covers of both the Velvets and Bowie), that was pure catnip for 80s college radio.

I didn't spend a lot of time with them after that, though occasionally they'd crop up on alt.rock radio. But Vinyl is worth a re-listen. Their major label debut after a few indie releases, it's got a lot more studio whomp! to the sound, aided immensely by the ringers they brought in--Stones guitarist Mick Taylor, Tom Petty keyboardist Benmont Tench, and legendary drummer-for-hire Jim Keltner. And the songs rise to the occasion, some real barnburners. Sure, Mick Jagger cover "Memo From Turner" is an obvious stand-out, but rousing tunes like opener "Until The Next Time," poppy "Haven't Got A Clue," glammy, "Ain't It The Truth," and boisterous "In Quiet Rooms" all beg for a quick twist of the volume knob. And then you've got the oddball mid-tempo Earth Day single, "What Are We Gonna Do," simultaneously snotty and earnest. The guest musicians make their presence known--there's a lot of Stones & Petty here--but you've also got nods to Iggy and maybe the Replacements.

It sounds like something that should've taken off just as "alternative" was making a commercial mark, but I don't recall it making much of a splash at the time aside from the rare MTV appearance. Which is a shame, as it's a fun one.

"Until The Next Time" audio rip:

"What Are We Gonna Do" video:

"Haven't Got A Clue" video:

"Ain't It The Truth" audio rip: