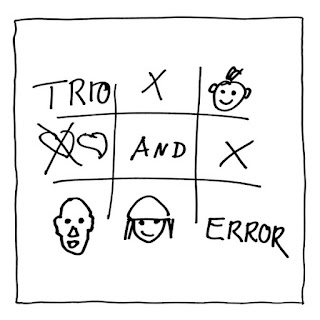 Back in high school, my record-buying habits were a little peripatetic. I was still in classic rock look-back mode, digging deep into the back-catalogs of the Who and Pink Floyd and Neil Young and Bowie and all the artists I discovered as a pre-teen and who had a deep bench of music awaiting discovery; not to mention my flirtation with prog, particularly King Crimson and Gabriel-era Genesis. And then there was my need to stay on top of the latest new wave releases, the bands you'd hear on the radio and see on MTV, running out to the mall to pick up the latest from the Go-Go's or Flock of Seagulls.

Trio were in the latter category. Three German dudes (snare drum, guitar, and toy Casio keyboard) who'd gotten a bit of traction with novelty songs like "Da Da Da" and "Boom Boom." I picked up Trio & Error on a lark, appreciating it was a silly thing that was instantly dated yet still ridiculously fun. It was a US vinyl LP that pooled songs from earlier European releases, a mix of English and German-language songs. Frankly, I only liked about half of it, but that half was great, at times capturing the silly faux-reggae of early Police. The afore-referenced pair of songs, already familiar to me from MTV; and others like "Anna" and the delirious Casio-driven "Drei Mann Im Doppelbett"). But especially "Hearts Are Trump," which I'll gladly defend as rising above mere novelty-song categorization as a truly great pop tune.

Not an album I listen to these days, but still fun to toss one of these tunes onto the occasional mix.

Inexplicably, "Hearts Are Trump" doesn't stream (unlike the rest of this, in various aggregations), but here's the video: