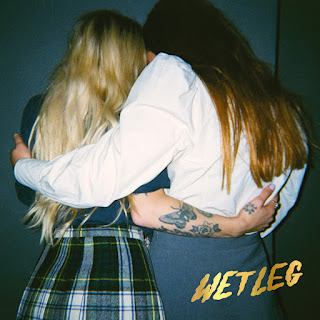 As I noted in talking about my Best of 2021 mix, Wet Leg's single "Chaise Longue" was either a joyous novelty song fated to being relegated to Covid-era guilty pleasure status, or simply one of the greatest pop songs of the past few years. Having played it a few dozen additional times since then with no sign of it growing tiresome, I'm going with the latter.

The band centered around two school friends from the Isle of Wight, singer Rhian Teasdale and lead guitarist Hester Chambers, have now followed up with their self-titled debut album. And while "Chaise" and their other great 2021 single "Wet Dream" tower above the rest of the record (aided by some killer videos), it's a fun affair, with enough lyrical cleverness and musical twists to keep it engaging. A few other songs are comparable stabs at radio-ready light-hearted slightly-skewed pop ("I Don't Wanna Go Out," "Ur Mum," and album closer "Too Late Now" grabbed my attention on first spin); attempts to mix up the sound (like the abrasive "Oh No") are a little more hit and miss.

But overall, the record ably captures the ethos of "Hey, we're locked down by a pandemic, let's start a band and be a little goofy!"