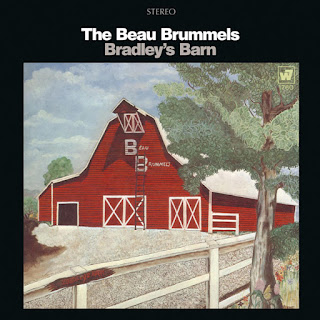 The Beau Brummels were a San Francisco-based '60s act that never got the same love as some of their peer bands. Like others in the Bay Area, they blended British Invasion pop with R&B, folk, and country. (An early covers album had them covering the Beatles, Stones, Mamas & Papas, Simon & Garfunkel, and Byrds, which gives some insight into their sound.)

But the AM radio-ready Beatlesque pop sound found on their (thoroughly enjoyable) first few records gradually gave way to a more rootsy American aesthetic. 1967's Triangle slots in along early records by other area bands like the Dead, Airplane, Kaleidoscope, and Moby Grape, a pre-psychedelic blend of pop and more traditional music. But 1968's Bradley's Barn (their final album, aside from a terrific 1975 reunion effort) went all-in, thoroughly embracing country and bluegrass, placing it alongside other better-known revivalist records like the Band's Music From Big Pink, the Byrds' Sweetheart of the Rodeo, and the Stones' Beggars Banquet.

The record mixes pop jangle with twangy finger-picking, gelling particularly well on infectious tunes like opener "Turn Around" and "Deep Water." Some really nice stuff for those not turned off by the earnest Americana vibe. (And if you like it, try to track down the Rhino reissue from a few years back, which appended a wealth of outtakes and alternate versions, a real treat for diehards.)