The Rolling Stones: Waiting On A Friend 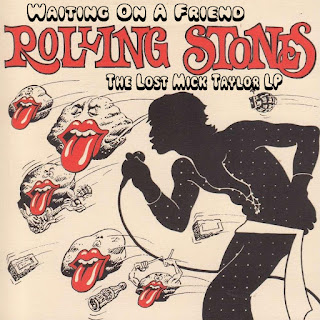 Been on a busy streak constructing "imaginary albums," and this is probably my last one for awhile. I'd been thinking about putting together a Great Lost Final Mick Taylor LP for some time, and finally pulled the trigger this week. It's ok, even pretty good, but it's hard not to conclude that the Stones, unlike some of their peers, rarely left their best work on the cutting room floor.

As noted in prior posts, I'm a sucker for Taylor-era Stones: Sticky Fingers & Exile On Main Street are obviously among the greatest rock & roll records ever (with Let It Bleed not far behind), and they were probably the best live band on the planet when Taylor was playing guitar. And I find Taylor's final two albums with the band, 1973's Goats Head Soup and 1974's It's Only Rock & Roll, to be underrated.

A few outtakes from his tenure have dribbled out on various releases: 1975's career-spanning Metamorphosis outtakes collection, 1981's Tattoo You (which saw the band polishing up some leftovers, and which was helpfully reissued with a bonus disc last year), and deluxe editions of Exile and Goats Head. I've compiled about an hour of those tunes, narrowed to those where there's some evidence that Taylor was involved in the original recordings.

Alas, as the Stones were actually pretty good editors (ok, up until the early '80s), the leftovers aren't among their most memorable moments (in contrast to bands like the Who or Pavement, whose outtakes are often as great as their album tracks). Aside from a few obvious ringers like "Waiting On A Friend," and a few intriguing mid-tempo numbers like "Plundered My Soul," little of this is truly essential. Upbeat rockers (i.e. "Come To The Ball" and "Jiving Sister Fanny") are fine but come across like standard-issue Keith Richards riffs lacking the killer hook needed to convert a 12-bar-blues into "Brown Sugar." Slower tunes (i.e."Fast Talking, Slow Walking") reach for more epic scope, but don't quite get there.

More problematically, the Stones aren't big fans of opening the vaults and giving fans an unvarnished look at the past; for both Tattoo You and the Exile reissue, the band recorded new vocals or other instrumentation on top of the rough takes. The result is a mix that doesn't always gel aesthetically, some of the reworked, glossy tunes sounding a little anachronistic alongside the rawer bits from Metamorphosis. 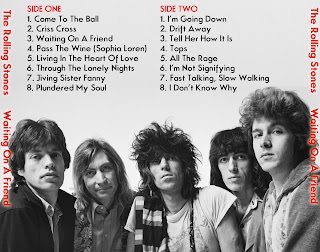 Still, even lukewarm '70s Stones cuts are pretty great, and it's kinda cool to finally have all these tunes in the same place. You can check it out for yourself below. (Note that the mix I made myself included two songs which don't stream ("Through The Lonely Nights," a 1974 b-side (and surprisingly lovely ballad); and the so-so rocker "Tell Her How It Is," from the semi-official collection Fully Finished Studio Outtakes, which, despite the album title, is still a bit rough-sounding).

Here's "Through The Lonely Nights," omitted from the Spotify playlist: