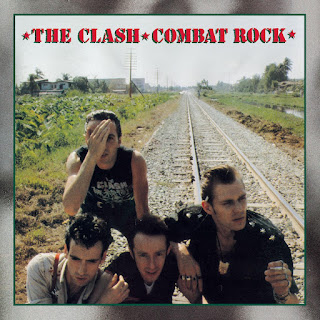 I've always had mixed emotions about the Clash's final studio album (ok, that's not counting the post-Mick Jones Cut The Crap, which most of us exclude from the proper discography). After releasing the single greatest rock & roll album of all time in 1979's London Calling, followed by the sprawling, at times confusing, but still legendary Sandinista!, Combat Rock--their first mere single-LP since 1978's Give 'em Enough Rope--couldn't help but be a bit of a letdown. Plus, when Mick Jones departed the following year, it meant the end of one of my favorite bands, and Combat Rock carries some of that taint as the band's break-up album.

Still, listened to objectively, it's pretty great. The two singles, "Should I Stay Or Should I Go" and "Rock The Casbah," are undeniable (even if years of radio overplay may limit their appeal somewhat). A few other tunes, particularly "Straight To Hell," "Car Jamming," and "Atom Tan," are no less worthy of canonization. And for all it's reputation as a more commercial album, it's often nearly as experimental as Sandinista!, from the trippy worldbeat atmospherics of "Sean Flynn" to Allen Ginsburg's spoken-word poetry overlaying "Ghetto Defendant." Alas, I'm less partial to some of the latter, where Jones' fixation on hip-hop and dance music appeals to me less than the band's traditional punk & rock chops. 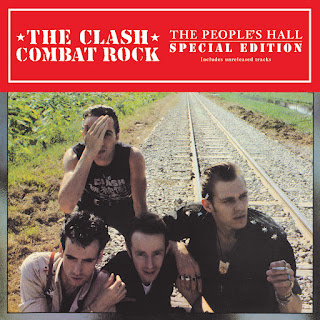 Anyway, it was recently released as a deluxe package (the "People's Hall Special Edition"), appending a number of outtakes. Mick Jones had originally pushed for the band to release another double album (bearing the title Rat Patrol From Fort Bragg), but it was later remixed and culled down to Combat Rock. And while I get a kick out of the longer version (which I've got on bootleg), it was ultimately the correct choice. Most of the outtakes (some of which have previously appeared officially on various compilations), even after you weed out a couple of the non-musical filler tracks, are inessential at best, and would have watered down the more concise record. Still, it's kinda cool to finally have official versions of some of the extras so you can hear what might have been.

(Unfortunately, the new package doesn't include some of the alternate mixes, like Rat Patrol's rawer-sounding "Should I Stay" and "Casbah," so I can't get rid of my bootleg version just yet.)

"Should I Stay" video:

"Casbah" video:"Straight To Hell" live:Outtake "Fulham Connection" (previously released as "The Beautiful People Are Ugly Too":