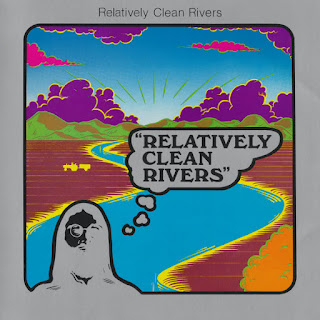 Regular visitors to these parts know that I nurse a special love for the "Obscure Short-Lived 70s Bands Who Clearly Listened To A Lot of Grateful Dead and CSNY" genre. Most of these records are forgotten for good reason; there's a nice, pastoral post-hippie vibe, maybe a few songs that stick, but much of the music lacks the staying power to elevate it beyond nostalgic curiosity value. Still, there are a few I really enjoy--bands like Mountain Bus or Timbercreek, to name a couple.

Relatively Clean Rivers is another act that's well above average. The album was an independent one-off, the work of Californian Phil Pearlman, who had also led a brief-lived 60s psychedelic band called Beat Of The Earth, previously covered here. The usual touchstones are all present--gentle Americana full of acoustic guitars, love & open-road lyrical themes, and nice harmonies. It's on the pithy side, barely half an hour, and that includes a few instrumental tracks; one can easily see this stuff really shining if it had been given true jam band treatment and a little more room to breathe. (Which is a little ironic, since the Beat of the Earth album was comprised of a mere 2 side-long tracks; I guess Pearlman want to try his hand at something less sprawling.)

A few tunes invoke the noisy psychedelia of the Beat album (like the chaotic "Babylon"), but tunes like "Easy Ride" and "Journey Through The Valley Of O" nail that back-to-the-garden ambience.

Alas, the record doesn't stream, and I don't know if it's available anywhere. But you can find a complete rip of the record on YouTube. For fans of mostly unknown cosmic American 70s music, it's worth a spin.