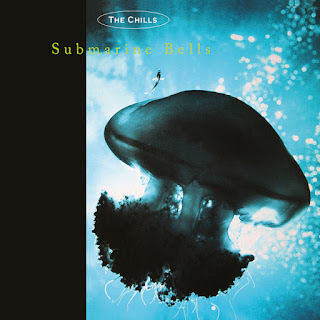 As noted before, I'm most partial to the compilation of early Chills singles, Kaleidoscope World, which is a little rawer and more comparable to other bands in New Zealand's Flying Nun stable like the Clean and the Bats. But their second full-length, 1990's Submarine Bells, is close behind. By this point, Martin Phillipps had honed his pop-craft, opting for a more sophisticated, artsy vibe, with pianos and haunting melodies and carefully embedded strains of melancholy.

Opening track "Heavenly Pop Hit" announces Phillipps' intention quite plainly there in the title; and while, like most of the Chills' music, it's a little too idiosyncratic to be a pop hit in the real world, with its organs and Phillipps' plaintive vocals, one can imagine a universe where this represents the sound of the charts. The album is full of comparably effecting mid-tempo pop tracks, like the emotionally striking "Tied Up In Chain" and the haunting "Part Past Part Fiction." A few tunes find the band turning up the amps and velocity, capturing their early garage band roots, such as the vigorously snapping snares on "The Oncoming Day" and particularly the bracing rush of "Familiarity Breeds Contempt" (with its shades of "It's The End Of The World As We Know It"). And then you've got the moody piano lines of "Effloresce and Deliquesce" showing off the band's psychedelic influences.

There's an otherness to the whole album that gives it a unique feel; it walks a line between indie mixtape stand-alone pop tunes and serving as an engaging, wistful whole.