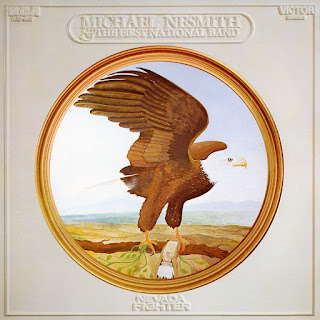 Michael Nesmith's passing late last year was particularly sad. After decades of trying to escape the Monkees' legacy, he'd finally seemed to embrace it, touring with Micky Dolenz, at a time when most had come to recognize the Monkees as not just that fake band from the silly tv show, but as purveyors of a wickedly fun and enduring catalog of terrific pop music.

Of course, Nesmith was always the most "authentic" musician of the band (though all had often under-appreciated talents), contributing a significant number of truly great originals mixed in with the well-chosen tunes typically written by professional songsmiths. The country rock bent of the songs was ahead of its time, well before it was popularized by mega-selling acts like the Eagles (and later inverted for post-punk Americana enthusiasts like the 80s cowpunks and the 90s alt.country bands). Gram Parsons gets most of the love for making country music safe to like for rock & rollers, via his "cosmic American music," but Nesmith is no less important.

After leaving the Monkees, Nesmith embarked on a critically respected (if commercially underwhelming) solo career that was far more purist in its embrace of country music--dropping the pop embellishments of his Monkees contributions in favor of straightforward old-school country-western (albeit with occasional early nods to country rock). I'm particularly fond of his first 3 solo records, recorded with The First National Band (which included some session musicians who played on Monkees records). The third of these, Nevada Fighter, mixes in a number of covers amongst his originals, giving it a bit more variety.

The first LP side, all originals, opens with "The Grand Ennui," a bit of a lark which shows Nesmith at his most playful. You've also got the gorgeous ballad "Propinquity," the straight twang of "Open Bound," and the rocking title track, probably his most upbeat tune (which, alas, makes one wish he'd more frequently included some rock within his traditionalist country-rock). The covers range from the cowboy standard "Tumbling Tumbleweeds" to a take on Derek & The Dominos' "I Looked Away."

It's a fine introduction to Nesmith's often under-appreciated run of terrific music throughout the early- and mid-70s.

Here's the reunited band performing the title track live in 2018: