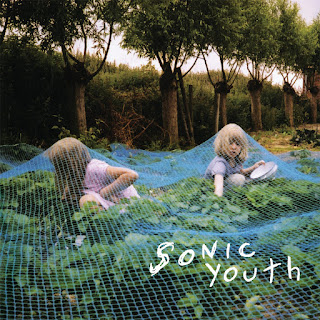 I have too many records.

Mind you, that should be beyond obvious to anyone familiar with this blog. And, hey, who cares? What's wrong with having too much music?

The problem, though, is that a lot of perfectly good music I enjoy hearing get lost in the (figurative, now digitized) stacks. I could scroll through the thousands of CDs in my digital library looking for something I haven't played in awhile, or I could throw up my hands and say, screw it, let's just spin up Abbey Road or Reckoning.

So when I have some downtime--say, theoretically, if 2 1/2 years of caution happened to crash and burn last week as I finally succumbed to the dread 'Rona--I try to find ways to rediscover music from the farthest reaches of my collection.

Take Sonic Youth. I still have tremendous love for some of their late 80s/early 90s classic, particularly 1987's Sister through 1992's Dirty. But I rarely reach for their later work, even if there are still plenty of gems to be found. 2002's Murray Street is one I really like. It was their first with additional guitars from Jim O'Rourke (also a sometime Wilco collaborator), giving it some added atmospheric texture. There's a nice balance between mellow post-rock-styled instrumental breaks and the more riff-oriented indie rock of their heyday (especially on relatively pithy opening tracks "The Empty Page" and "Disconnection Notice").

But like a lot of Sonic Youth, there are songs I just find too abrasive in my advancing years. And because life is short, I lose patience with some of the noisier extended jams. But like some other stuff in the back of my collection, rather than abandoning it in favor of more immediate favorites, I've tried to reconfigure it to suit my current tastes. (This doesn't just go for challenging acts like Sonic Youth; I've talked before about reconstructing favorites from the Clash, Pavement, and others so that I'm more interested in replaying them.)

That means jettisoning songs I just don't want to listen to again (in this case, the cloying "Plastic Spoon"); and, more ambitiously, editing out some of the unnecessary noise codas (which turns "Karen Revisited from a chaotic noise-fest into another Lee Ranaldo catchy near-pop tune). Chop a minute or so off "Radical Adults Lick Godhead Style" and "Sympathy For The Strawberry" as well, and you've got yourself a brief (just over half an hour) but compelling record that holds up with the band's best.

Is this blasphemy? A betrayal of the band's art?

Who cares. Life is short, and now I'm spinning an album again that had been gathering dust.