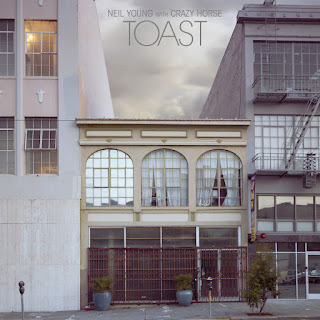 Neil's latest archives release dropped this morning, yet another shelved record that he's finally deigned to unleash on the masses. And while Toast--originally slated for a 2001 release--may not be quite the "great lost album" as other aborted Young efforts like Homegrown and Hitchhiker and Chrome Dreams (still available only as a bootleg), it's another worthy part of the catalog for fans, particularly compared to what was released in its place.

Recorded with on/off again bandmates Crazy Horse, Young decided at the time that Toast was a little too dark. So he bailed on the record, instead joining up with legendary R&B band Booker T. & The MGs for 2002's Are You Passionate? Now, some of Young's self-editing makes sense (consider all the Zuma extras that finally showed up on his most recent Archives box set, which were pretty cool and made for a fun imaginary double-album, but it was hard to deny the official Zuma was better as issued). Not so here. Passionate is probably my least favorite Neil Young record (not counting his more recent work, which I've largely taken a pass on). Sure, his penchant for mixing things up is part of what's kept him a vibrant artist for half a century, and, as on 1988's This Note's For You, adding a bit of R&B to his sound wasn't wholly without appeal. But I really, really didn't like Passionate at the time, and it felt like a real letdown after his surprisingly solid 90s resurgence following the wreckage of the 80s.

So his decision to scrap Toast feels kind of inexplicable. It's not necessarily a great or essential album viewed in a vacuum, but it's a far better album than Passionate (or at least a far more authentically Neil-sounding record). Four of the album's seven tracks showed up on Passionate in one form or another. "Goin' Home," the one song on Passionate recorded with Crazy Horse rather than the MGs, is pretty much the same track; while others sound better with the Horse than they did with the MGs (and at minimum work better in the context of Toast than interspersed with Passionate's pop and R&B cuts). Particularly improved is "How Ya Doin'", which appeared on Passionate as "Mr. Disappointment," musically similar but with the bewildering gruff vocals on "Disappointment" replaced with Neil's more standard croon. Sprawling album-closer "Boom Boom Boom" (titled "She's A Healer" on Passionate), works better with the Horse as well, though one can question whether the full 13-minute running time is warranted.

The three new songs here aren't bad. I like "Gateway of Love," another one of those sprawling mid-tempo epics, not especially memorable but of a piece with his 90s jams. "Timberline" and "Standing In The Light Of Love" are pithier, the former kinda cool (though the latter is one of those jackhammer Crazy Horse stomps that grow old fast).

BTW, in listening to the new one, I cued up Are You Passionate? for the first time in 20 years, and have to admit I enjoyed it more than I did at the time. (I could say the same thing about This Note's For You, which, with the passage of time, can be enjoyed for what it is rather than bemoaning it not being the Neil Young record I wanted when it was originally released.)

Alas, with Young's ongoing Spotify boycott, I can't share it here (sorry about the dead links on my prior Neil Young write-ups). But here are a few tracks.