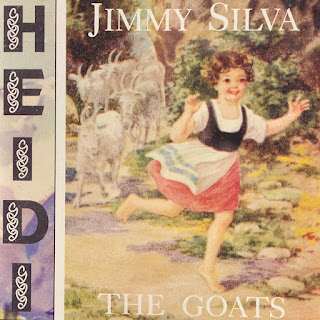 Here's one of those charming, understated little pop gems you'll kick yourself for having missed at the time. (At least, I kicked myself.)

The late Jimmy Silva (who sadly passed away quite young in 1994) was part of the 80s indie music scene in both San Francisco and Seattle. He had some ties to the Young Fresh Fellows (who covered one of his songs), and that band's Scott McCaughey (also of the Minus 5 and a billion other bands) plays and sings on this record, as does the Posies' Ken Stringfellow. Given those credentials, the album unsurprisingly sounds a bit like the Young Fresh Fellows and the Posies--sweet and jangly heart-on-their-sleeve pop tunes, infused with a late 60s sunshine pop/psych sensibility. There are a few edgier tunes, brief blasts of garage band energy working their way into the mix, but for the most part it sticks with gentle, whimsical ditties ensured to bring a smile to your face. And Silva's wistful vocals (reminding me a bit of Guided by Voices' Tobin Sprout), particularly when joined by McCaughey's harmonies, are endlessly endearing.

(The CD version I have is paired with a second album of earlier Silva tracks, equally great.)