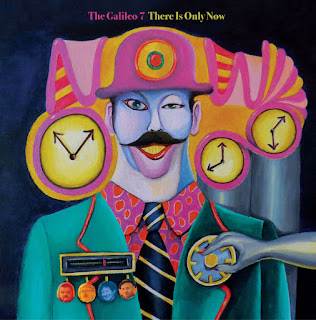 British 60s revivalists The Galileo 7 add a modern power pop energy to classic mod/freakbeat riffs, coming across like The Who circa Quick One/Sell Out (not to mention the Small Faces and the Action), maybe some light psychedelic touches of Syd Barrett-era Pink Floyd, as performed by, say Material Issue or Sloan, only very, very British. At times their playful but reverent reinterpretations of late 60s psych-pop stylings call to mind XTC's work as the Dukes of Stratosphear.

Which is a long, name-dropping way of saying this is a fantastic little LP.

Lead-off track "Everything Is Everything Else" is your new favorite song, perfectly melding a wicked power pop hook with that 60s mod vibe. And while the band is the brainchild of UK indie rocker Allan Crockford, I'm particularly partial to the songs where he turns the mic over to keyboardist Viv Bonsels (whose effervescent vocals remind me of  Hilarie Sidney of the Apples in Stereo/High Water Marks)--"Too Late" and "I Dream Of Sleep" are both ridiculously catchy, verging on energetic sunshine pop.

You can preview/buy it on Bandcamp. (While you're there, also check out their delightfully fun 2020 covers album, which includes amped-up tributes to not just obvious forerunners the Who and Floyd, but the Soft Boys, X-Ray Spex, and the Monkees, among others.)

Here's the video for "Too Late":

...and a live-in-studio "Everything Is Everything Else":Here's an audio rip of "I Dream Of Sleep":