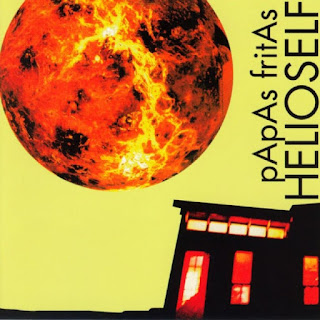 Papas Fritas were a 90s American indie band who released three albums between 1995 and 2000. They were idiosyncratic to a fault, ranging from the twee bedroom pop of Beat Happening and the Kill Rock Stars scene (sharing the alternating male/female vocal approach) to post-Pavement eclecticism to Elephant 6-like skewed power pop. On this, their middle record, they were at their most pure pop, with fun (yet still oddball) sing-along, hook-filled anthems.

The opening salvos of "Hey Hey You Say" and "We've Got All Night" are terrific, upbeat rockers, somewhere between the Apples in Stereo and Lilys, with maybe a bit more of the alt.rock radio-ready sound of, say, Imperial Teen. Those are balanced out with the quieter home-brewed sounds of songs like the joyously sweet "Say Goodbye," reminding me of indie 90s girl bands like Tiger Trap and Softies. There's a nice balance between the energetic rock of "Small Rooms" and the gentle sunshine pop of "Rolling In The Sand" and "Words To Sing," but it all sounds distinctively clever, too artsy to easily slot into indie power pop.

Their other records have some great moments, and the 2003 collection Pop Has Freed Us provides a helpful overview, but this is probably their most consistently approachable record, worth checking out.