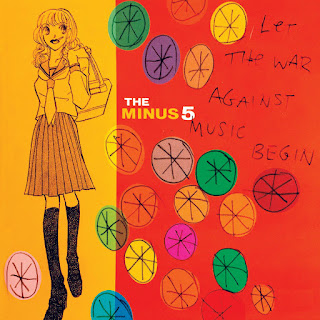 Indie rock living legend Scott McCaughey had a birthday this week, and in a weird coincidence I logged into Bandcamp this morning to discover that some of his very best work is finally, finally, getting a re-release as of TODAY. Of all the albums he's played on with his myriad bands (Young Fresh Fellows, the Minus 5, the Baseball Project, Filthy Friends, the No Ones, etc., not to mention being a utility player for everyone from R.E.M. to Robyn Hitchcock), this is among my favorites. It was originally released as a double-album package alongside a Young Fresh Fellows album, Because We Hate You. And while that one is pretty good as well, I think the Minus 5 half gets the edge here.

The first half of the album alone belongs in the annals of power pop classics, a non-stop parade of ridiculously catchy tunes. "Great News Around You" is an earnest slice of Brian Wilson-tinged baroque sunshine; "Got You" is a melodic delight; "Ghost Tarts of Stockholm" is a churning, dense blast of sonic joy, a noisy updating of the Beach Boys' "Cabinessence"; "The Rifleman" slows things down for a McCaughey story-telling showpiece; and "You Don't Mean It" closes it out with the sort of chiming sing-along power pop that would be a #1 single in any just universe. The second half may not be able to maintain that level of ludicrous consistency, but it's still plenty great, a bit more mid-tempo but no less melodic.

The original Minus 5/YFF paired CD is out of print (and doesn't stream), though you can find it used on Amazon. But as of today you can buy/preview the digital version of War Against Music, bolstered with another dozen outtakes every bit as worthy as the original album, over on Scott's page at Bandcamp. (Or buy it on vinyl if that's your thing!) 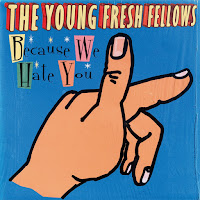 None of which is to say the Young Fresh Fellows component of the original album isn't totally fun as well. The Fellows were always the more playful, garage-band counterpart to the more nuanced Minus 5, but given their common band-leader, the two records are unsurprisingly pretty similar. "Barky's Spiritual Store" is a perky little bit of power pop; "Good Times Rock & Roll" is sweet mid-tempo pop broken up by minor drum implosions; and "Fuselage" is an atypically slinky groove, an entrancing hook digging in deep. (Starting today, you can grab this record separately on Bandcamp, likewise enhanced with a shit-ton of outtakes.)

Here's "You Don't Mean It" live on Conan: