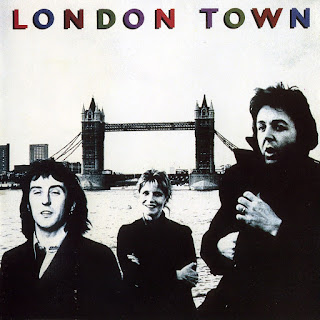 I've never understood why London Town seems to get so little love. It's just about my favorite Wings album (I listen to it at least as often as the far more revered Band On The Run), maybe just short of Ram among my favorite post-Beatles McCartney releases.

Yes, like a lot of his solo work, it can be awfully saccharine, tending towards the sappy; but the tunes on London Town are undeniably charming. More than anything, they are ridiculously melodic, with McCartney's genius for a gentle hook in full bloom, probably a more consistent album musically than most of his post-Beatles work. There's a melancholy tone to the whole affair, and while I'm not sure if that derives from the music or some long-forgotten association I have with the record, it feels honest and personal in a way that Mac's better-known albums do not. (Of course, my love for the album may also stem from my strong dislike of the predecessor, Wings at the Speed of Sound, imbuing it with a sense of relief, a solid comeback for a childhood hero.)

The singles, "With a Little Luck" and the title track, are both great, and while one might dismiss them  as dated 70s trifles (particularly the cheesy keyboard sound of "Luck"), I find them delightfully engaging and timeless. "Cafe On The Left Bank" is terrific, Paul sounding unusually energized; "Backwards Traveler" is inventive ear candy, frustratingly short at barely a minute long (with a weirdly funky instrumental follow-up); "Don't Let It Bring You Down" is a haunting, downbeat, folk-tinged number, the flutes a bit distracting but still a stunner. Then there are the stranger/sillier tracks: "Famous Groupies" is a sort of follow-up to Venus & Mars' "Rock Show," and while I'm sure a close listen to the lyrics might be prove troubling these days, it's a bit of playful fun amidst an at times somber record; and album closer, "Morse Moose & The Grey Goose," may be one of Paul's more divisive songs, but put me in the "big fan" column, totally digging its strange sea shanty tale sandwiched between one of Paul's more bracing vocal turns since "Helter Skelter," a staccato, morse-code guitar rave over a disco-fied beat, a crazy little mess that is totally bewitching.

More so than any other Wings album, this feels like a real team-up between Paul and his 70s collaborator Denny Laine (who would depart after just one more Wings album); Laine gets a co-write credit on 5 of the record's 14 tracks (including the wonderful/dreaded "Morse Moose"), and takes lead vox on two of them. Laine adds an understated, folk touch to the record, and while Speed of Sound was plagued by Paul's attempt at band democracy, the rest of the band's contributions paling in the shadow of one of history's greatest songwriters, here he and Laine really gel. The Laine-helmed "Children Children" is a bit of light folk that sounds like something from Cat Stevens, while the similarly titled "Deliver Your Children" is quite moving.

There are some weak tracks here, to be sure; "Girlfriend" is painfully precious, and "I've Had Enough" is a generic boogie that feels more like filler, though at least it rocks out a bit.

Crazily, this is one of the few 70s McCartney albums that has yet to receive the deluxe reissue treatment, something I hope he remedies soon; it could definitely use a remaster, feeling a little sonically lifeless on the old CD version I have.

Here's the "With a Little Luck" video:

...and the "London Town" video:Here's Denny Laine, some years later, performing "Deliver Your Children":...and an audio rip of "Morse Moose": YOU be the judge!