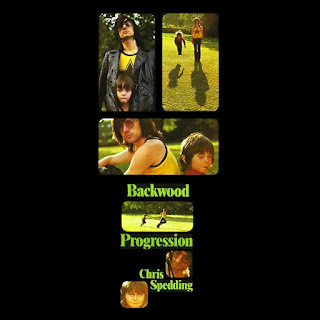 Guitarist Chris Spedding, like pianist Nicky Hopkins, is the epitome of the rock & roll session man: hardly a household name in his own right, yet collaborating with pretty much everyone over the years (Paul McCartney, the Pretenders, the Sex Pistols, Roxy Music, Elton John, Nilsson, etc.). He's also released a variety of solo albums, mostly well below the radar screen (at least here in the States). I'm partial to his mid/late 70s stuff, as well as his later elder-statesman period, when his rootsy/rockabilly stylings and punk-adjacent connections would place his work somewhere in the general Nick Lowe/Dave Edmunds/Graham Parker ethos with shades of Dire Straits. (1977's Hurt is an under-appreciated classic.)

But his early 70s stuff is pretty interesting. 1970's Backwood Progression, his second solo album (following an instrumental debut), is... well, kinda weird and ill-defined. It ranges from eclectic singer-songwriter to skewed folk/Americana to a sort of pre-glam art rock. Think, say, Bowie's Hunky Dory or the first Mott the Hoople record or Cockney Rebel, as peformed by the Band or Brinsley Schwarz. Spedding isn't the most dynamic vocalist (mostly sounding like Mott's Ian Hunter, with some Dylan or Mark Knopfler thrown in), but the roughness gels with the patiently ambling music. And for all Spedding's rep as an in-demand guitarist-for-hire, the album downplays the flashy guitar, with the pianos at least as prominent in the mix.

Again, it's an odd little record, definitely of its time, but there's an enchanting eccentricity to it I really dig. The sprawling, almost proggy opener "For What We Are About To Hear" is a bewitching mess; the rocking "Words Don't Come" is a mish-mash of Dylan and Mott and the Faces; "The Hill" conjures the Band's Americana; "She's My Friend" sounds like an upbeat outtake from the Velvets' Loaded; "Never Carry Any More Than You Can Eat" is unpretentious fun, Spedding finally letting loose a bit of that guitar magic. It's hardly an essential album, more like one of those well-kept secrets that caters to consummate music nerds.

Here's an audio rip of "She's My Friend":