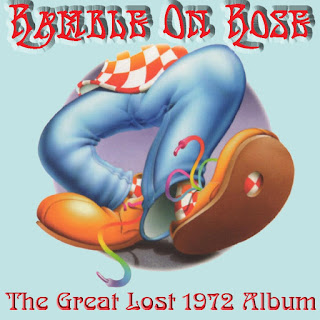 Another in a series of imaginary albums I like to make for myself from time to time, this one is an attempt to capture what a 1972 studio album from the Dead might have sounded like.

After releasing their 2 legendary 1970 albums, Workingman's Dead and American Beauty, the Dead didn't release a proper studio album (at least under the Grateful Dead moniker) until 1973's wonderful (and underrated) Wake of the Flood. But this doesn't mean they weren't coming up with new material during that time; to the contrary, song for song it may have been the band's most prolific period. A few new originals showed up on 1971's self-titled live album ("Bertha," "Wharf Rat"), while more than a half dozen new originals debuted on the live Europe '72. Additionally, Jerry Garcia's 1972 solo album Garcia contained a number of songs that would become permanent fixtures in the band's live repertoire, while Bob Weir's Ace that same year--ostensibly a solo album, but featuring the entire band--added a number more.

Amidst all this activity, there was talk of a planned studio album to be called Rambling Rose (a tweak of the Europe '72 track "Ramble On Rose"). Alas, the band opted to stick with the live release instead. In the absence of studio material, I've cobbled together a fictitious version of the proposed 1972 album. Most of the tunes I used are drawn from the official Europe '72, with the balance of tracks--primarily live versions of songs that appeared on the Weir & Garcia solo albums--are drawn from other documents of the 1972 European tour (the entirety of which was eventually released on a massive box set). 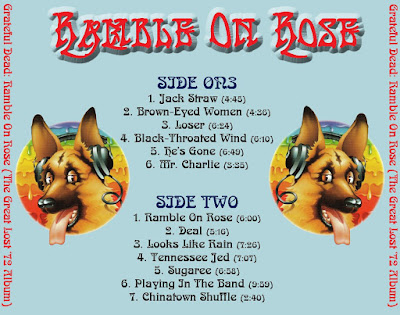 I opted against using the live '71 songs, which didn't quite mesh sonically with the later material, and used live versions of the Garcia/Weir solo tunes rather than their studio versions so the album would flow together better. For my personal CD, I edited out the applause and segued the songs together to create the vibe of a studio LP (easily done for the Europe '72 tracks, which were already touched up in the studio on the original release); for the Spotify playlist below, I was stuck with some applause on the remainder of the tunes.