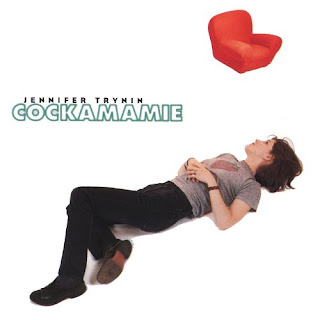 One of those shoulda-been-huge albums that had its brief time in the sun but has since largely disappeared from public consciousness. Which is a damn shame, as I really like this record a lot.

Trynin's debut placed her among the many women who seized the alt.rock spotlight at the time, sounding somewhere between Liz Phair and PJ Harvey and Bettie Serveert and the Breeders. It's very much a '90s alt.rock album, meaning noisy, grungy guitars and big, rocking hooks, with a crisp, dry sound that gives it a slightly dated feel, definitely capturing a particular moment in time. But there is some top-notch songwriting here, and Trynin's voice and guitar playing are thoroughly bracing. I'll admit that Cockamamie isn't the sort of thing I've played start-to-finish very often, even back when it was new, but it's got a few stand-out tracks that deserve placement in the 90s alt.rock canon.

"Better Than Nothing" is the obvious killer single, ridiculously infectious, still sounding great a quarter-century later. It received a fair amount of airplay at the time, but I can't say I've heard it played publicly since then, when it clearly deserves at least as much respect as other songs of the era which have found much longer-lasting traction. A few other tunes leap out as well, rightfully picked as singles: The rollicking album opener "Happier" totally kicks, and the delightfully catchy "One Year Down" is a veritable anthem that should've shot up the charts. The balance may not hold up as well, but there are some choice nuggets. I really like the mellow "Snow," some nice guitar harmonics and an understated charm.

She followed this up with the comparable Gun Shy, Trigger Happy in 1997, but that one was pretty much roundly ignored and she ended up dropping out of the music biz (writing a book about her travails in 2006). She's kicked around with some pick-up bands since then. I saw her live when she was promoting this (opening for someone in San Francisco, I forget who, maybe Pavement or Yo La Tengo), and I'm hoping I'll get another chance.