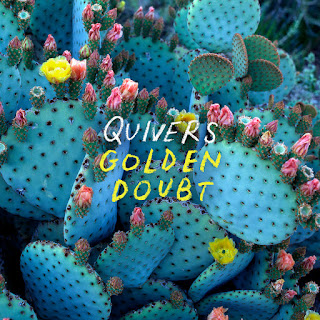 One of the tell-tale symptoms, and unabashed joys, of being an Obsessive Music Fan™, is that you never quite outgrow that tingly feeling you get when you randomly discover some wonderful new album and just have to share it with everyone you know.

Anyway, Australian indie band Quivers just released a new album full of sweet, jangly, occasionally melancholy pop, and I'm just loving it. As a jangly Australian band, they're obviously gonna draw a lot of Go-Betweens comparisons (particularly from that band's less quirky, more folk/poppy latter days), but they're earned. Not to mention the obvious shout-outs to early R.E.M. and New Zealand bands like Look Blue/Go Purple. (And who knows, maybe even the legendary Primitons.) Anyone who knows me knows I'm a sucker for treble-crazed guitars and catchy hooks and interwoven male/female vocals, so this record pushes all the right buttons, but it's pretty damn great.

Opener "Gutters of Love" sets the right tone, a bittersweet slow-builder with wicked female backup vocals that eventually breaks into a rousing anthemic rocker. The arpeggiated guitars of catchy numbers like "When It Breaks" and "Chinese Medicine" and the fantastic, chiming "You're Not Always On My Mind" are obviously gonna call to mind R.E.M., but the band doesn't just rely on the sonic touchstones for lovers of 80s college radio, with insinuating melodies and lyrics that add some darkness to the mix.

They mix it up on occasion, "Hold You Back" introducing some orchestrated elements giving the song a 60s AM pop feel. The album's front-loaded, with some quieter ballads on the back-end (the album-closing title track a somber piano tune), though even mellower tunes like "Overthinking" are lovely.

BTW, the R.E.M. respect here isn't inadvertent; the band recorded a cover-to-cover remake of Out of Time last year, and it's pretty cool, changing things up just enough to really make the album their own.

You can buy Golden Doubt on Bandcamp.