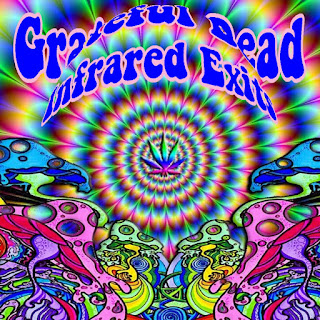 As my conversion to the Dead didn't come until the mid/late '80s, partway through college, most of the Dead shows I saw were in the band's twilight years. And let's face it, their '90s performances could be pretty grim. Jerry's voice was shot, if he could even remember the lyrics; their increased reliance on MIDI (Musical Instrument Digital Interface) technology, giving an inorganic sound to much of the music, was at best divisive; and a lot of the newer material they were introducing to the set wasn't exactly compelling. So while I feel some personal nostalgia for the '90s shows, as representing the sound of the band I actually got to experience face-to-face, I only rarely listen to recordings from that era, heavily favoring their shows from '68-'69, '73-'74, and '77.

Still, thanks to the encouragement of some online denizens, I've come to appreciate some 1989-1991 performances, when they could still deliver real magic. There's a pretty dramatic decline after that, but I've recently started digging into those later recordings, trying to salvage some enjoyable compilations of tour highlights. One result of this project is Infrared Exits, a 2-CD mix drawn from their 1995 tour that blends mostly instrumental jams, with a few vocal tracks, into a headphone-friendly extended ambient excursion.

The part of the show that really shone for me in this era was the Drums segment (and, to a slightly lesser extent, Space). I know not everyone is a Drums/Space fan (when I saw my first Dead show in '87, my buddy told me that Drums/Space signaled a bathroom break, though I was totally riveted by the band's free-form explorations). By the '90s, as Mickey Hart introduced all manner of strange electronic and world-music percussion into the mix, Drums ended up becoming my favorite part of a Dead show. And, needless to say, it's a big part of this mix, alongside a few other random bits, all segued together into nearly 160 minutes of cosmic bliss. 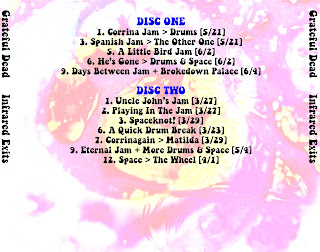 You can download the 2 discs as zipped filed from SendSpace; note that they will expire in about 30 days, so jump on it if you're interested.

Here's an excerpt from the mix:

(Note that I previously shared a similar Phish ambient mix, consisting solely of instrumental jams; as well as a silly but fun mix made up entirely of the Dead jamming on The Eleven. [I just re-upped the download links, so they should be working.] I'll also get around to uploading a few more Phish ambient mixes one of these days.)
File Under: 1990s Ambient Bootlegs Grateful Dead Jam Band Live Music Mixtapes Psychedelia