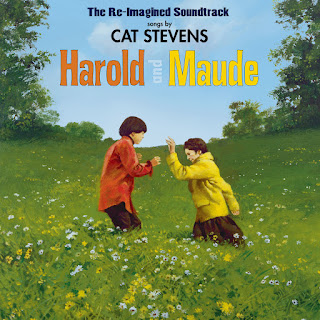 Back in college, I had some friends who swore by the 1971 film Harold And Maude. I dimly remember finally catching it during a late-night viewing, when the university ran weekly showings of cult and art-house films catering largely to students who'd gotten a little too high and needed a place to crash out for a couple hours. (Other movies I remember seeing during this period: Clockwork Orange. The Harder They Come. 2001. And so on.) And yeah, it's a great movie, definitely unique, something I firmly believe everyone needs to see, though it's not one that I've revisited much since then. Bud Cort's bizarre suicide enactments remain fascinating, as do his interactions with his mother; but the late Ruth Gordon, while phenomenal, I find hard to watch in large doses (aside from Rosemary's Baby). The movie feels just a little too Manic Pixie Dream Girl these days, albeit boldly replacing the doe-eyed young beauty with... well, with Ruth Gordon.

But the movie did go a long way to redeeming Cat Stevens for me. As a kid, he was on my list of must-avoid artists, largely owing to being an inescapable presence at overnight camp sing-alongs as well as one of the artists found in my dad's small stash of 8-track tapes (alongside Herb Alpert, Barbra Streisand, the Carpenters, and a lot of Ennio Morricone soundtracks). But the prominent placement of his music in such a bizarre cult hit gave him a stamp of coolness. (Alas, a few years later the whole Salman Rushdie controversy again rendered him musical persona non grata, and it was many more years before I once again re-discovered his music.)

Anyway, it's on my mind because, a half-century after the film's release, they've finally gotten around to releasing an official soundtrack (and, coincidentally, the movie popped up on cable the other night and I watched for a little bit, though I didn't make it that far). It's not something I plan to buy--most tracks are on his proper albums (Mona Bone Jakon and Tea For The Tillerman, both released in 1970), and the two originals in the movie later surfaced on a 1984 greatest hits collection, so it's not like I don't already have the songs elsewhere.

But it did inspire me to create a new imaginary soundtrack (as I'm wont to do on occasion). I interspersed the Cat Stevens songs with more contemporary covers of songs that somehow, for inexplicable reasons, just feel like they belong here. They include a couple Stevens covers (both Kristin Hersh & Elliott Smith covering "Trouble," and William Fitzsimmons covering "The Wind"), and a random assortment of others (both Susanna Hoffs and, once again, Kristin Hersh covering Nick Drake; Golden Smog covering the Kinks; and so on). So it ends up sounding more like a Wes Anderson soundtrack, which is kinda cool. 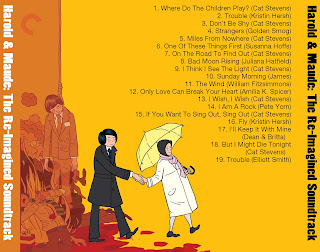 Here's a Spotify playlist (I had to cut one song from my CD mix; James' fine version of the Velvet Underground's "Sunday Morning" doesn't stream). Enjoy!