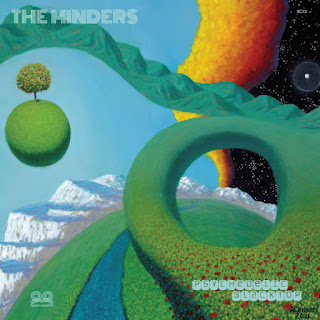 The Minders are one of the original 90s-era Elephant 6 indie pop bands; I've written previously about their early work, so I don't need to add much here. But I'm pleased that, after a decade-long sabbatical, their second wind is going strong, if at a leisurely pace. 2016's Into The River was a welcome return, and the new one, released just last week, is even better, one of the band's most consistent records since their 1998 full-length debut. The title is a bit deceptive; the Minders were always one of the least psychedelic acts of the E6 stable, and this one is similarly firmly in 60s-styled straight pop mode, simple melodies and unpretentious production and performances, placing them alongside peers like Beulah and the Apples in Stereo.

Standouts include the sweet "Magic Anorak" and the synth-abetted "Listen! The Bugle Calls." "On My Own" offers chiming jangle (and, ok, it wigs out a bit at the end of the song, finally some of that psychedelic blacktop we were promised); and album closer "These Days" is an understated charmer.

Really nice stuff. You can pick it up at Bandcamp.

The new release also gave me an excuse to put together a new Minders playlist. Check it out!