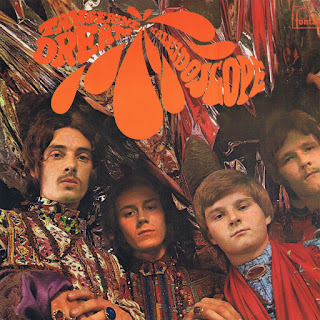 Heading back now to one of my biggest passions, the British psychedelic era of the late 60s.

It gets confusing because there were two psych bands with the same name at the time.  The US Kaleidoscope, based in L.A., was more analogous to other West Coast bands like the Grateful Dead and Moby Grape, integrating elements of folk and blues and American traditional music (as well as more esoteric Eastern music) into their experimental sound.  Whereas the UK band took their cues from the usual suspects, bits of Sgt. Pepper and Piper at the Gates of Dawn, though leaning heavily towards more twee bands like the Bee Gees and early Moody Blues.

Tangerine Dream, their debut, is quite solid, certainly not as essential as other records of the era but still packed with some highly melodic, occasionally trippy tunes.

The eponymous opener "Kaleidoscope" is gentle psychedelia, as are similar tunes like the ponderous "Dive Into Yesterday" and "Flight From Ashiya."  Other tracks lean towards the whimsical side, pretty and very British, like the charming "Mr. Small The Watch-Repairer Man" and the sweet "Dear Nellie Goodrich."  It falls off a bit at the end, with the Donovan-like spoken-word "A Lesson Perhaps" and the lengthy, folk-tinged narrative epic "The Sky Children," both eminently skippable, but overall it's a nice enough record for fans of the genre.

My version of the CD (but, alas, not the version of the record that streams on Spotify) adds a few singles that outshine the album -- the sharp psychedelia of "A Dream for Julie" and particularly "Jenny Artichoke," a more traditional British Invasion pop song that is by far the catchiest song the band recorded, though stylistically different from the rest of their output.

The follow-up album, 1969's Faintly Blowing, is arguably more substantial, a little less quaint and more deliberately experimental, moving towards prog.  (The compilation Dive Into Yesterday combines the bulk of the two albums plus the afore-referenced singles, and is all the Kaleidoscope you really need.)  The band later changed its name to Fairfield Parlour for some reason, releasing a few albums that were more folk & prog oriented, but which had some truly beautiful songs that are largely lost to history.

Here's the band lip-syncing "Flight From Ashiya" on tv (as well as an inessential early single "Holiday Maker"):

And here's that wonderful "Jenny Artichoke" single:
...and an audio rip of "Mr. Small The Watch-Repairer Man":


And if you need a little more British psychedelia, here's a playlist you might enjoy (putting Kaleidoscope in the proper context):
File Under: 1960s Classic Rock Kaleidoscope Psychedelia