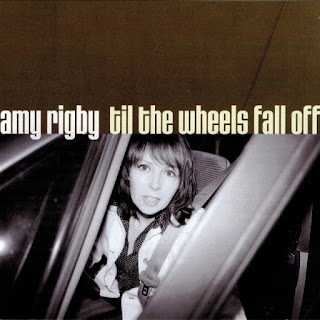 Returning now for a second look at the inimitable Amy Rigby... and while her wonderful debut is the best starting point for newbies, all of her records are packed with lovely tunes, from singer-songwriter-pop to Americana, with lyrics that range from poignant to pointed.  On her fourth, she revisits some of her familiar themes, particularly the challenges of finding and maintaining love as an adult (and life as a parent). And as always, the combination of earnest, mature lyrics and Rigby's fragile, heart-on-the-sleeve vocals make the album a moving listen.

The highlight for me is "Don't Ever Change," the most heart-tugging song Rigby's written (in a catalog full of heart-tugging songs); a basic "Thirteen"/"Speeding Motorcycle" acoustic guitar riff packed with lyrics that invariably have me tearing up:


I saw my baby sitting there at the breakfast table
His hair a mess and he forgot to shave
And I wished that he would get up, make it all better
Stop drinking so much, learn how to behave
Then the radio was playing a Chuck Berry song
And he was looking at me asking what was wrong
I made a list of the things I could say
But he gave me a wink and it all went away, I told him
Hey I love you, you're perfect, don't ever change


And of course you've got the playful, upbeat "Are We Ever Gonna Have Sex Again," the frank and familiar ode to post-marital love:


Life's become a great big list
Of things to do and buy and fix
At night we pass out before ten
Are we ever gonna have sex again?

A few of the tunes turn things up a notch, maybe not rocking out but at least fun and energetic, like the bubbly, cheerful title track, a rollicking little boy-girl duet; opener "Why Do I," while painfully self-deprecating, moves at a brisk clip; and "Believe In You" has a dreamy, electric, almost psychedelic groove. But for the most part it's quiet and mostly acoustic, campfire songs for the romantic and/or broken-hearted over-30 set.

Here's an audio rip of the title track:
Here's a nice, extended solo live performance from Amy in 2004; "Sex" is just past the 30-minute marker:
(The whole gig is fantastic, and she's joined on the last few tracks by her daughter Hazel, for songs including a delightful cover of Wire's "Mannequin.")

Here's a live take on "Don't Ever Change" (performing with husband Wreckless Eric):
Buy the album on Bandcamp.