Rockpile: Heart Of The City (A Mix) 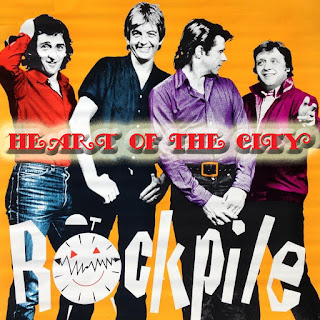 Got to talking with some folks about Rockpile yesterday, which reminded me that I've been meaning to make a mix of the band's work -- and, coincidentally, Dave Edmunds' extensive discography has just recently been added to Spotify (in the past couple weeks), so it seemed an opportune time for a new playlist.

As written about previously, Rockpile was a mid/late-70s supergroup of sorts -- fronted by Nick Lowe, who had recently departed pub rockers Brinsley Schwarz and was starting his solo career, and Dave Edmunds, who had a few singles with Love Sculpture and was similarly striking out on his own. They were joined by guitarist Billy Bremner and drummer Terry Williams. Lowe and Edmunds shared vocal duties (either alone or harmonizing); Lowe contributed his blend of classic roots rock, power pop, and new wave styles, accentuated by his clever lyrics, while Edmunds was primarily an interpreter of others' work, with a more rockabilly/50s rock & roll style.

The Rockpile four-piece only recorded one album, 1980's terrific Seconds of Pleasure. But they also appeared on a number of Edmunds' solo albums (1978's Trax on Wax 4, 1979's Repeat When Necessary) and on Lowe's 1979 release Labour of Lust), all of which were largely Rockpile albums. The band also played a couple tracks on Lowe's fantastic debut Jesus of Cool, including "They Called It Rock" and a live version of "Heart of the City" (which also appeared on Edmunds' Trax on Wax, only with Edmunds' vocals dubbed in for Lowe's). Various configurations of the band also contributed to a few other Edmunds and Lowe solo releases. 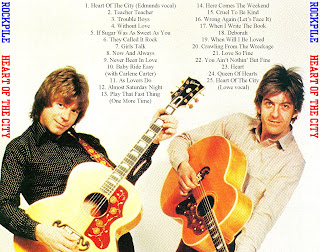 This mix combines the highlights of the band's work from across those projects (as well as their stint backing Lowe's then-wife Carlene Carter). The Spotify playlist below is missing a couple tracks (the version of Trax on Wax on Spotify is defective, which I've reported, so we'll see if they fix it so I can complete the playlist). Enjoy!

[UPDATE: Spotify actually fixed Trax on Wax in response to my inquiry, so the playlist has been expanded.]

...and "Queen of Hearts":
...and a wonderful live medley of "So It Goes" and "Heart of the City":
File Under: 1970s Classic Rock Dave Edmunds Mixtapes New Wave Nick Lowe Power Pop Rockpile Supergroups