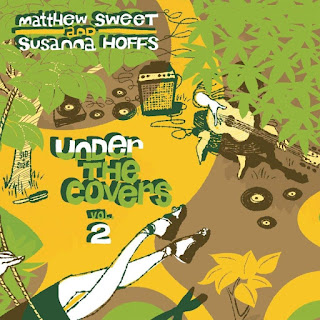 Yeah, it's kind of a cheat to go with a covers album, especially one where the songs are more or less done straight, with few real twists. Where's the originality?

But the whole three-volume series is such a non-stop delight that I can't help but totally love it. When it comes to power pop bona fides, you can't get much better than this pairing. Both Sweet and former Bangle Susanna Hoffs have shown a penchant for well-chosen covers throughout their careers (the Bangles' take on Big Star's "September Gurls" was one of the earliest shout-outs to the legendary power pop band, preceding the Replacements' "Alex Chilton" and the whole late-80s/early 90s Big Star revival; and Sweet has a non-stop parade of amusing covers among his extensive b-sides and soundtrack contributions).

But it's on the Covers series that the depth of their record collections shines through.  The three volumes cover the 60s, 70s, and 80s, respectively, each a well-chosen mix of obvious classics and left-field picks. I'm partial to the middle volume, as it covers such an unexpectedly wide swath of ground, everyone from the Dead to Derek & The Dominos to Tom Petty to Mott the Hoople. They unsurprisingly hit on a few obvious power pop touchstones, like the Raspberries' "Go All The Way" and Big Star's "Back of a Car" and Todd Rundgren's "Couldn't I Just Tell You," but this shines more where they break the mold, like on "Bell Bottom Blues" and Yes's extended prog classic "I've Seen All Good People."

While Sweet's personal musical taste and guitar work drives the effort, it's Hoffs's vocals which are the key selling point, her sweet and alluring pipes giving a fun twist to the largely male-dominated song selection.The record's finest moments (as on all three volumes) are where Sweet and Hoffs share vocal duties (ok, I'm a sucker for male-female harmonizing, but I happen to love them both individually as vocalists, and paired up they are a true joy) -- just crank up their album-opening cover of the Dead's "Sugar Magnolia" and it's hard not to be instantly won over.

The 60s package, while still quite varied, covers a lot of ground that is arguably a little too familiar; while the 80s songs (mostly a delightfully eclectic new wave & indie rock romp) may be just too fresh to benefit from reinterpretation, allowing the 70s covers to fall right into the sweet spot. But all three volumes are packed with wonderful songs and given a chiming power pop crackle.  (One caveat -- these albums are really LOUD for some reason; when I put them on shuffle play with the rest of my music, they overwhelm everything else, and I kinda wish they had kept the needle a little more out of the red.)

Notably, each volume was supplemented by a number songs available only by digital download -- Volume 2 was particularly aided by these bonuses, with the selections (including Television, the Ramones, Queen and the Allmans) arguably even more interesting than the album itself.  The whole series, bonus tracks and all, was later compiled into a single box, which needless to say is ridiculously awesome.

Here's an audio rip of the Rundgren cover:
And a live acoustic rendition of Fleetwood Mac's "Second Hand News":
...as well as a live acoustic "Maggie May":
Here's an audio rip of "Killer Queen" (one of the bonus tracks):
This one's from Volume 1, but here they are performing "Cinnamon Girl":
And also from Volume 1, an unplugged take on the Beatles' "Rain":


While you're here, how about those other volumes?