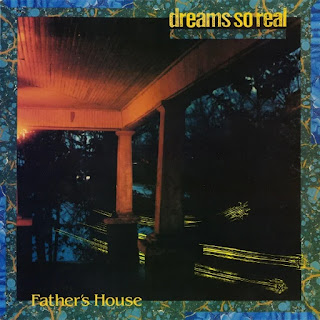 In the annals of all those Southern jangly-guitar bands that dominated college radio in the wake of R.E.M. (Guadalcanal Diary, the Connells, Love Tractor, etc.), Dreams So Real get a little less attention than seems fair. Father's House, their debut LP, doesn't stream, and I don't think it ever even received a CD release. (I've got an old vinyl rip.)  But it's actually a pretty solid record.  Peter Buck's production gives it some cred (though it's hard to judge the production quality, as the version I've got is a little on the muddy side), and there are some lovely harmonies.  It may lack the killer single, but as a whole it's perfectly enjoyable and worth seeking out.

Opener "History" is an upbeat rocker, kinda reminiscent of Guadalcanal Diary; the guitars are big and boomy, though it lacks a truly compelling hook. "Heaven" is quieter, more melodic and brooding, calling to mind the legendary Winter Hours.  "Drifting Away" is perky and catchy, one of the better tracks here, as is "(Maybe I'll Go) Today," each holding up well all these years later.  "Capitol Mall" has a nice percussive vibe, shades of the Feelies (whose second album Buck also produced).

Here's an audio rip of the entire album:
Here's an audio rip of "Heaven":
Here's a live version of "Maybe I'll Go Today" from a recent reunion gig with other Athens bands (I think).
As mentioned, the album doesn't stream, but you can find a nice compilation (Nocturnal Omissions) which has a few tracks from the LP ("Today," "Heaven," "History," "Up To Fate") among other nifty tunes.

The follow-up album, 1988's Rough Night In Jericho, is arguably a better, more consistent album, certainly with improved sound; and unlike the debut, you can stream it. (I'm just a little partial to the debut because it introduced me to the band.)  Check it out:
File Under: 1980s College Radio Dreams So Real Great Lost Albums Indie Rock Jangle Pop